International Day for Protection of the Ozone 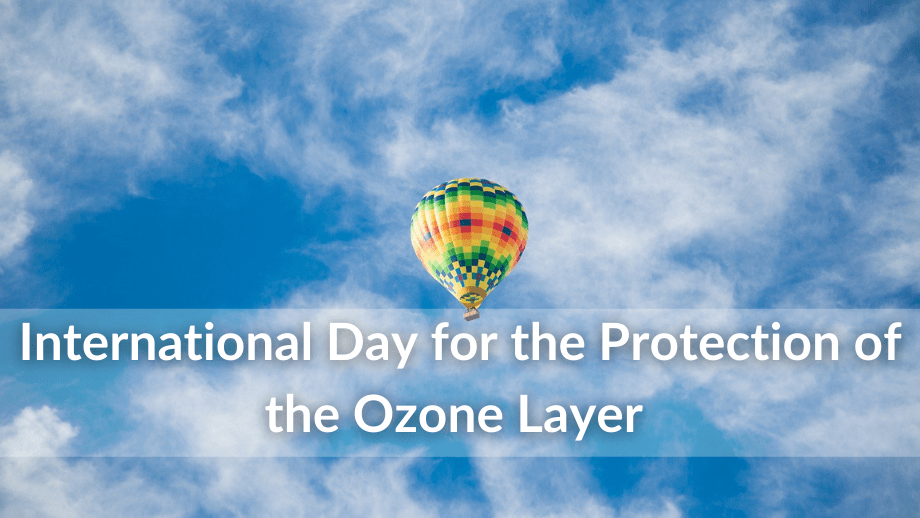 The 16th of September is “International Day for the Preservation of the Ozone Layer”, as it commemorates the date that the “Montreal Protocol on Substances that Deplete the Ozone Layer” was signed, in 1987.

It set out to regulate the production and usage of around 100 chemicals that are referred to as ozone depleting substances (ODSs), across developing and developed nations, with an ultimate goal of protecting the ozone layer. (UNEP)

Why is it important to prevent the depletion of the Ozone layer?

Decreased concentrations of stratospheric ozone allow increased amounts of UV-B to reach the earth’s surface and so ozone loss can result in potential harm to human health and the environment, including but not limited to:

While acting to deplete ozone, CFCs and HCFCs also act to trap heat in the lower atmosphere, causing the earth to warm. Thus the Montreal Protocol was amended in 2007 to accelerate the phasing out of HCFCs, which were typically used in refrigeration, air-conditioning and foam applications globally.

The reduction in emissions of CFCs, HCFCs and now HFCs due to the Montreal Protocol will avoid up to 1.7C of warming by the end of this century (Financial Times)

Furthermore, the Montreal Protocol may have done even more to mitigate man-made climate change by shielding forests and other carbon sinks from UV radiation that would have reduced their ability to capture and store CO2, which would have had a knock-on effect and will help us avoid another 0.8C of warming by 2100.

What can we do?

There are a number of things we can do ourselves to continue to prevent damage to the Ozone layer.

We can limit our car usage and we can shop locally to avoid the production of NOx which also depletes the Ozone layer. If we do buy (second-hand) air-conditioning and refrigeration equipment, we can make sure that they do not use HCFCs as refrigerant. We can also plant trees to help absorb NOx through the stomata.

The good news is that “through domestic and international action, the ozone layer is healing and should fully recover by about 2065”. (EPA) To this day, the Montreal Protocol is the only global treaty to achieve universal ratification of 197 countries.